Teenage schoolgirls and smartphones, part 2 of 2

Following on from women and mobile games, I now present a survey from Pre-Can Teens Labo by GMO into teenage schoolgirls and mobile phones.

This is another rather large survey with lots of interesting data to consume. Of all these YouTubers and Instagrammers, there are only two I’ve heard of. I won’t touch TikTok, though, as I trust them even less than I do LINE!

Fake News here seems to be neither Trump’s definition, news he doesn’t like, nor the original meaning of deliberately false information shared via web sites made to look like legitimate sources to inflame political debate, but just people posting flat-out lies.
END_OF_DOCUMENT_TOKEN_TO_BE_REPLACED

Teenage schoolgirls and smartphones, part 1 of 2

Following on from women and mobile games, I now present a survey from Pre-Can Teens Labo by GMO into teenage schoolgirls and mobile phones.

This is another rather large survey with lots of interesting data to consume. LINE is, as you can see, the messenger app for not just schoolgirls, but just about everyone in Japan. I avoid it like the plague, though as I don’t trust them with my phonebook, and my wife has the problem that once a corporate account makes contact, it’s pretty much impossible to block them, and even if you manage to they can reconnect.

On the other hand, Facebook seems remarkably low, but I’ve heard in America only old people use Facebook, so perhaps that is a trend in Japan too.
END_OF_DOCUMENT_TOKEN_TO_BE_REPLACED

Are the rumours about Japanese girls schools true?

I am occasionally accused (quite rightly!) of spicing up story titles, but today this survey from goo Ranking needs no extra help from me, when they asked what rumours about Japanese girls schools are they curious to find out if they are true or not.

I wonder given the subject matter that only the males were asked the question? Then again, women who haven’t been to a private school may be curious too to know the answer. 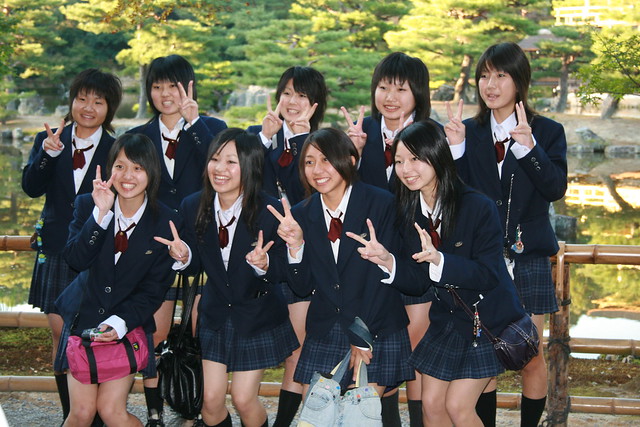