Japan and America in the age of Trump; part 2 of 3

Although the Japanese press on the whole lauded Trump’s overtures to North Korea and made a big thing of the relatives of the Japanese hostages talking to Trump and getting a nice positive soundbite out of it, it was obvious to me that Trump was spouting any old nonsense in an effort to get his ratings. Satisfyingly, the Japanese public seems generally to share similar opinions.
END_OF_DOCUMENT_TOKEN_TO_BE_REPLACED

Furthermore, Trump will be coming from a G6+1 meeting where he’ll be actively disliked and out of his depth, so no doubt the Kim side will exploit that with much buttering up and flat-out bribery, as that worked for China. My prediction for an outcome will be the continuation of North Korean claims and apparent actions towards denuclearisation but without inspections, whereas USA will draw down troop numbers in South Korea, a McDonalds in Pyongyang and the renaming of the Trump Ryugyong Hotel.
END_OF_DOCUMENT_TOKEN_TO_BE_REPLACED

Almost everyone follows North Korea news, majority affected by it

It is interesting to see what bothers the Japanese about North Korea. Note that in Q1 the wooden boats refers to wooden fishing boats that get swept to the Japanese coast.

Here’s a detail from a mural in a film studio in North Korea – I think the guy with the rifle is Japanese holding North Koreans prisoner: 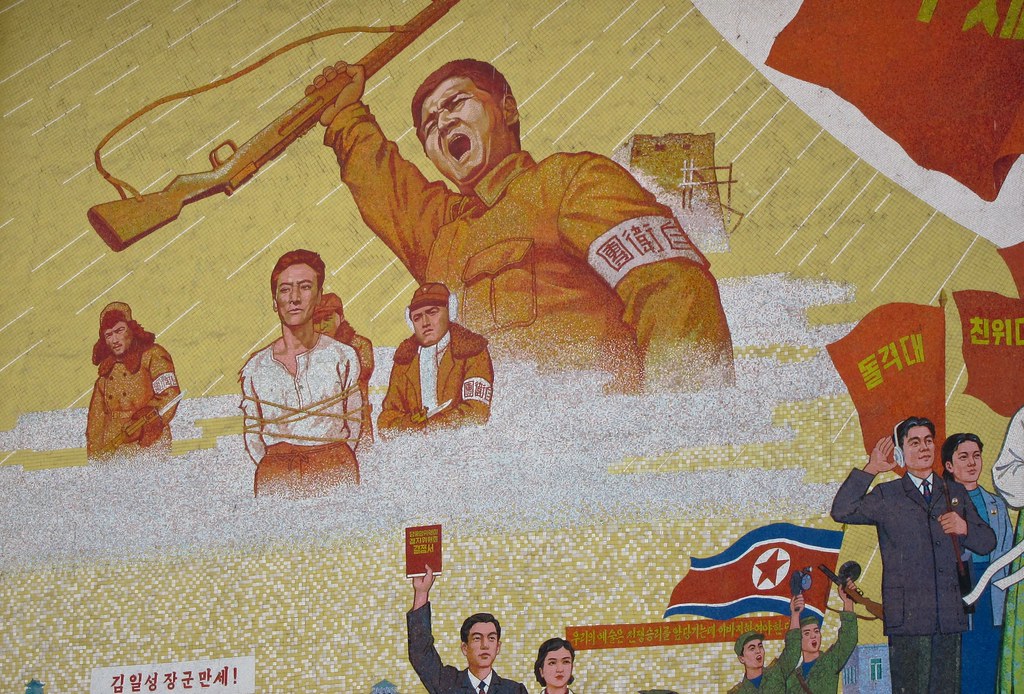 END_OF_DOCUMENT_TOKEN_TO_BE_REPLACED

If there’s one subject that gets many foreigner eyeballs rolling, it’s the ongoing saga of the North Korean abduction issue, where about 20 or more years ago a number of Japanese nationals (and other nationals) were abducted by agents of North Korea, a subject kept alive by many politicians for political ends, as this survey from the Cabinet Office Japan perhaps demonstrates.

Between the 7th and 17th of June 2012, 3,000 Japanese citizens aged 20 or older were selected at random from residency records were approached for face to face interviews. 1,912 people chose to answer the questions, but more detailed demographics were not provided. Note that this is the first time that selection method in these Cabinet Office surveys have mentioned that it is citizens; up until now it has just said people over 20, but since foreigners have recently been added to the main registry system, and that registry is used as the source for the random sampling, I presume they have decided to add the extra qualification.

There’s a number of reasons why North Korean abductions induce eye-rolling. For my part, it’s a combination of it being raised to such a level as appearing to sticking a spoke in the wheel of the six country talks on the DPRK, that the Koreans have said themselves that they consider the matter finalised, and by the most likely reality that the remaining missing people are dead. There’s also victims of international divorces gone bad who bring up the dissonance between Japan’s response to child abductions and North Korean abductions.

Note that the blue flag that the Prime Minister and other politicians wear is their yellow ribbon for the abductees.
END_OF_DOCUMENT_TOKEN_TO_BE_REPLACED