As a man, there are no surprises with the male answers to this survey into attractiveness, but the female answers look very unusual! Note that these questions were part of a longer survey, so the questions do seem a bit disjoint.

Note that the first question is whether you would chase the same person as your friend had their eye on, or would you pass to preserve your friendship.

I’d rank hair and smell higher up, but there is a definite lack of bums in this country to rate them as
END_OF_DOCUMENT_TOKEN_TO_BE_REPLACED

This survey from goo Ranking looked at romantic situations people find unrealistic; many of those below are from corny manga comics or Hollywood movies. Number 16 in particular features in far too many human dramas, be they on TV or movies there is inevitably a scene involving some kind of romantic incident in the pouring rain.

Here is an example of the overused cliche of running to school with toast in one’s mouth: 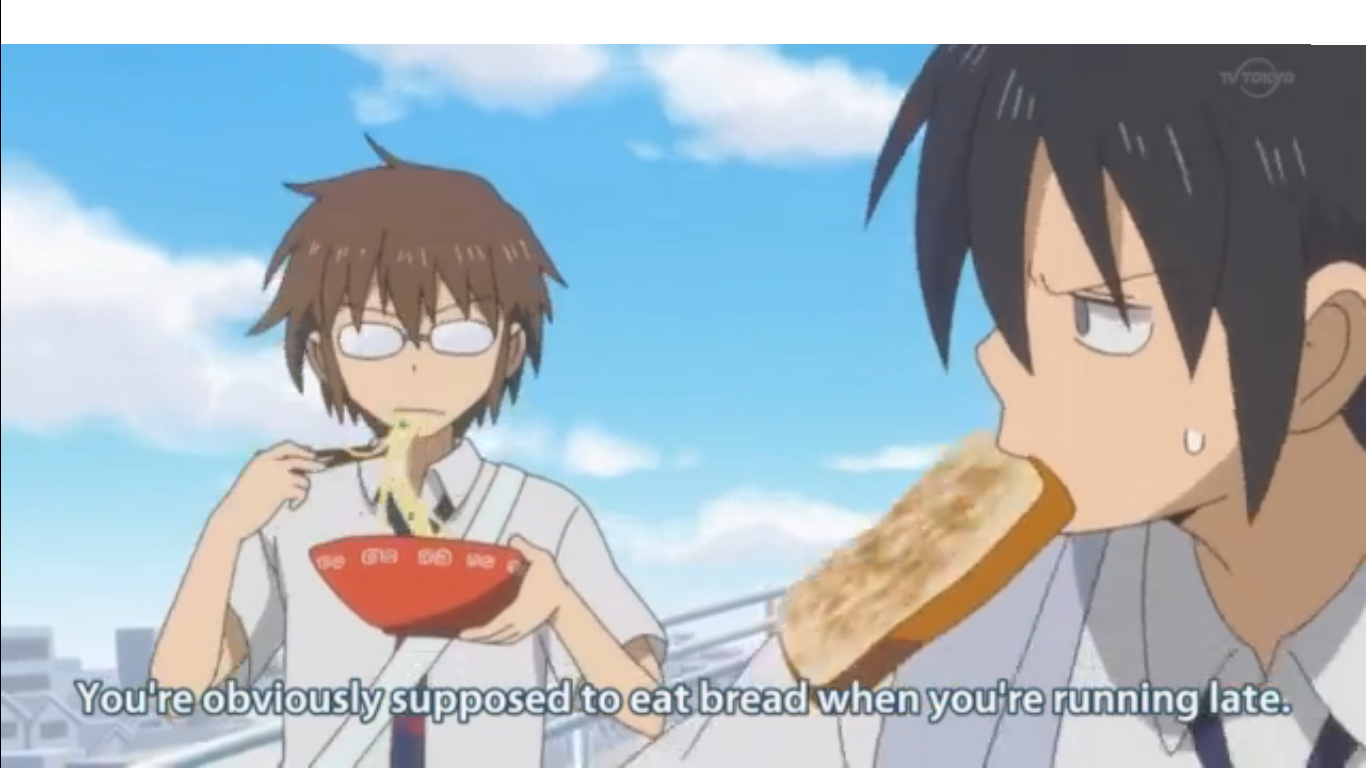 END_OF_DOCUMENT_TOKEN_TO_BE_REPLACED

Here is a new-to-me survey company, Qzoo, who conducted a survey on behalf of Sirabee into dating foreigners.

It’s just a single question survey, but the figures were interesting to me, and hopefully to my readers too. However, there is a huge question; why have just one or two percent of those in their thirties dated a foreigner? The foreigner population is round about 2%, so by random choice, if was just a single partner that people had, it would be correct, but with multiple partners, plus given the stereotype that many younger single Japanese have never had a date, the ratio of foreigners in the dating pool may be higher than the raw 2%.

By area of residence, the survey pointed out that the third-most popular tourist spot for foreigners is Disneyland and Disney Sea in Chiba, but it would seem that Mickey is more attractive than the opposite sex.

Here’s a foreigner with his Japanese wife pouring him a beer – wish I could train mine like that! 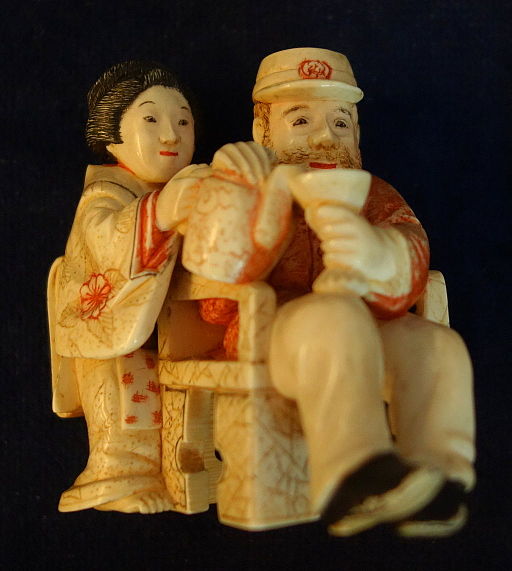 END_OF_DOCUMENT_TOKEN_TO_BE_REPLACED

20 ways to blow your declaration of love in Japan

goo Ranking looked this time at how to muck up a declaration of love.

goo Rankings asked iBRIDGE’s Research Plus to conduct this survey, where between the 1st and 3rd of June 2015 500 members, 50:50 male and female, of their monitor group completed a private internet-based questionnaire.

I think my own declaration of love went well, although the flowers I gave her died horribly in a far too hot car.
END_OF_DOCUMENT_TOKEN_TO_BE_REPLACED

Weblio recently published a self-serving survey into Japanese women’s views on international love, although given the sample group, the results here should not be used to extrapolate to the whole Japanese population.

Between the 24th of January and the 2nd of February 2015 471 female members of the Weblio service completed a survey performed using Macromill Inc’s Quick-CROSS tool. No age details were provided.

I’m not sure how common the phrase in the headline is, but there is a trait found in certain Japanese women who want their token foreigner man to show off to their friends, or just get free lessons off, thus the English vampire in the title. Actually, when I met my wife, she too was to some extent looking for just English conversation practice before a planned working holiday to the UK.
END_OF_DOCUMENT_TOKEN_TO_BE_REPLACED

Here’s an interesting survey from goo Research that I wish had been around a month ago, as the topic was quite hot then. Regardless, I present it anyway, a look at why Japanese are unable to find a partner for many a year, for both women and men.

The survey was conducted between the 4th and 8th of October 2013 where 1,074 people completed a private web-based questionnaire. However, goo Ranking have recently revamped their ranking page and have dropped the link to their demographics. Note that the score in the results refers to the relative number of votes for each option, not a percentage of the total sample.

The reason I say it was a hot topic was because there was a rash of “sexless youth” stories based on a poorly-translated or misconstrued survey into young people and relationships.
END_OF_DOCUMENT_TOKEN_TO_BE_REPLACED

Single working women: one in three can live without love

There’s been a lot of surveys over the past few years about single Japanese and their widespread disinterest in matters of love, so as another datapoint I present this survey from the Nikkei newspaper (Japan’s Financial Times) into single working women’s real love situation.

During the month of June 430 single female readers of the Nikkei newspaper aged in their twenties or thirties completed a private internet-based questionnaire. The average age was 32.9 years old, the average salary was 3,077,000 yen, and the average number of people they had had a relationship with was 3.6.

A colleague at work would fall into the sample demographic above (perhaps she even did answer it!) and the impression I get from what she talks about and her Facebook posts is that she’s far too into girls’ nights out to be bothered with all this love nonsense. On the other hand, Japanese seem to keep their relationships secret, so I can’t say I know what is really going on!
END_OF_DOCUMENT_TOKEN_TO_BE_REPLACED

Thirtysomethings and love in Japan

goo Ranking had an interesting survey on stereotypes of single people in their thirties and looking for love, for both women and men. Note that this time both sexes voted in both the surveys.

As someone who was single for half my thirties, I can identify with a lot of them, in particular number 19 for the guys, which was one that did actually come true!
END_OF_DOCUMENT_TOKEN_TO_BE_REPLACED

PR Times printed a press release from Kanro, a sweets maker, who conducted a survey into love charms, as part of a promotion of a new product they have, “Magical Pure”, a pureed gummy (Jelly Baby) type of thing, with a special promotional site featuring Perfume that quite badly killed my browser!

Over the 25th and 26th of April 2013 242 young women aged between 20 and 39 completed an internet survey, but how they were selected is not described.

Being far too rational, I have zero belief in any of this nonsense, and not even when I was a teenager did I indulge, although admittedly it was probably because I wasn’t really interested in all that sort of thing while I was at school.

Anyway, enough about me, on with the survey!
END_OF_DOCUMENT_TOKEN_TO_BE_REPLACED

Feeling you shouldn’t have dumped her

Not a very festive note to end the year on, but I liked the topic of this goo Ranking, into the moments when one realises one still has feelings for their ex, for both women and their ex-boyfriends and men and their ex-girlfriends.

Between the 5th and 7th of November 2012 1,049 members of the goo Research monitor group completed a private internet-based questionnaire. 58.8% of the sample were female, 10.2% in their teens, 14.6% in their twenties, 27.5% in their thirties, 25.1% in their forties, 11.0% in their fifties, and 11.7% aged sixty or older. Note that the score in the results refers to the relative number of votes for each option, not a percentage of the total sample.

I’ve never had the experience of this myself, but I remember one time putting my foot in it with a rather tactless email to a friend about his ex which probably put him in situation number 8 for the men. I’m not going to tell you the details, however, at least not in a space where my mother is listening!

The difference in roles in Japanese society is highlighted by comparing the female #11, a hidden high salary, to the male #12, hidden housework skills. A recent survey (which I should really translate!) highlighted that 51% of Japanese men thought basically that the woman’s place is in the kitchen.
END_OF_DOCUMENT_TOKEN_TO_BE_REPLACED