goo Ranking recently took a look at which fortune telling methods people think are the most accurate. As the survey is a bit short, I’ll leave in the Japanese terms as a little bit of education.

The six planets divination is the speciality of the evil witch Kazuko Hosoki, a Guinness Book record holder as the best-selling author in the world. Thankfully, about two or three years ago she disappeared from the television screens (there must be a story behind that!) but recently she’s made a comeback on adverts for her mobile phone site.

Here’s an old photo of a street fortune teller, using shuuekisendanjou some Chinese technique that doesn’t feature in the list below: 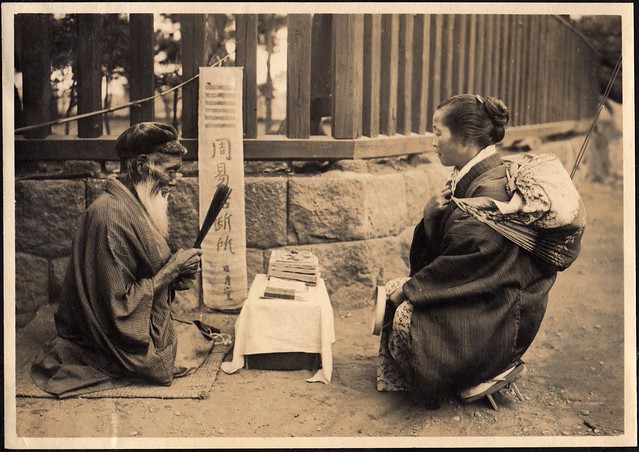 END_OF_DOCUMENT_TOKEN_TO_BE_REPLACED

Before I start, let me say that all astrology is bunk. However, it is in Japan, like everywhere else, big business with frauds highly-talented (at extracting money from gullible individuals) people like Guinness Book of Records best-selling author in her category, the awful Kazuko Hosoki, or the Feng Shui (pronounced to rhyme with “load of old hooie”) “Dr” Copa who will sell you cheap plastic yellow tat guaranteed to increase his your wealth. Oooh, and don’t get me started on blood types!

There, I feel better now. infoPLANT recently had an open survey available for one week through an iMode menu on the topic of fortunes. As with all the other infoPLANT surveys, the self-selecting nature of it will bias the sample towards heavy iMode users. Over one week in the middle of March, 6,031 people, 32.9% male, completed the mobile web-based questionnaire. I will use the term “horoscope” in this translation to cover all the various types of fortune-telling that the Japanese word å ã„, uranai, covers.
END_OF_DOCUMENT_TOKEN_TO_BE_REPLACED