A lot of English (and other language) words end up as loan words in Japanese, but many of them, particular technology-related ones, are unfamiliar to many Japanese, so goo Ranking took a look at what loan words do people often hear but don’t know the meaning of.

In the list below I’ve decided to use the English spelling, as I find it grating when journalists re-transliterate back to the Roman alphabet, such as using sarariman instead of salaryman. In this survey, spelling number one as innobāshon (or innobāsyon for bonus irritation points) wouldn’t help anyone understand what I was on about.

By the way, I’d never heard of Social firm, Ancien régime (French) or Merkmal (German) until this survey.

I had a look for a picture of “innovation”; would an innovative pyramid watermelon do? 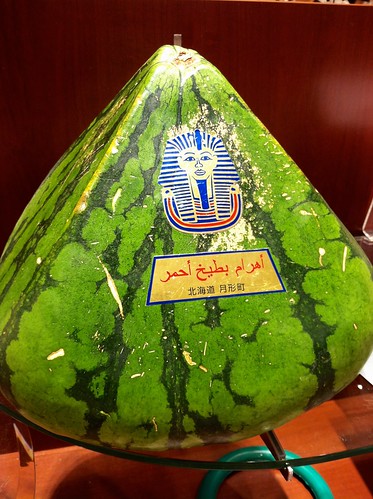 END_OF_DOCUMENT_TOKEN_TO_BE_REPLACED

This survey from goo Ranking is entitled Japanese English expressions that won’t actually be understood abroad, but the survey description fails to mention as far as I can see what criteria people are supposed to use to choose the words; perhaps they are words they presumed would be understood, but were surprised to see them on the list of Japan-only English?

Of course, anyone from the UK will be surprised to see number 41, and it’s Scotch tape that wouldn’t be understood on these isles.

My least-favourite Japanese English is “yell”, which is used in the sense of cheering for a team, etc, such as in “Sending a yell to the Japanese Olympic team”. Furthermore, due to the lack of a “ye” sound (it was deprecated at some point in the past and only hangs on in a few words like the beer “Yebisu”) the Japanese pronunciation drops the “y”, which only serves to annoy me further about the word.

However, with translations like this being far too common, worrying about whether or not “order-made” will be understood or not seems to be putting the cart before the horse! 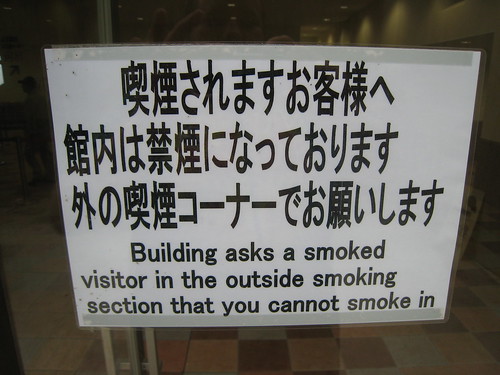 END_OF_DOCUMENT_TOKEN_TO_BE_REPLACED

Weblio recently published a self-serving survey into Japanese women’s views on international love, although given the sample group, the results here should not be used to extrapolate to the whole Japanese population.

Between the 24th of January and the 2nd of February 2015 471 female members of the Weblio service completed a survey performed using Macromill Inc’s Quick-CROSS tool. No age details were provided.

I’m not sure how common the phrase in the headline is, but there is a trait found in certain Japanese women who want their token foreigner man to show off to their friends, or just get free lessons off, thus the English vampire in the title. Actually, when I met my wife, she too was to some extent looking for just English conversation practice before a planned working holiday to the UK.
END_OF_DOCUMENT_TOKEN_TO_BE_REPLACED

The survey was conducted from the 21st to the 23rd of November 2013, and 1,054 people completed a private web-based questionnaire. Note that the score in the results refers to the relative number of votes for each option, not a percentage of the total sample.

I once tried to explain to a Japanese person that “speed up”, “slow down” and “slow up” were perfectly valid, but the Japanese-English “speed down” was nonsense in English!
END_OF_DOCUMENT_TOKEN_TO_BE_REPLACED

Over the 29th and 30th of August 2013 437 people who had had the experience of being engaged in English conversation by a foreign visitor to Japan. The sample was of both sexes and between the ages of 20 and 59, but no further information was offered. Judging by other surveys on their site, I think that the sample was taken from site users.

Note that since (I presume) the sample comes from English language learners, I would guess that they are more proactive and positive in their English and tourist views, therefore it would be difficult to extrapolate to the general population. However, since I occasionally hear English conversation teachers complaining about the backward and insular views of their students, I feel the results here indicate that these opinions may be the result of confirmation bias rather than actually representative.
END_OF_DOCUMENT_TOKEN_TO_BE_REPLACED

goo Research recently conducted a survey into overseas travel and language learning, the highlights of which japan.internet.com published.

I too much specify a preference for real books and real language schools, which leads me to think that perhaps there is an age bias in this survey. The figures were not reported, but older people tend to travel overseas more (I think…), thus older people would tend to be more wedded to 20th century technology, thus the bias away from virtual learning?

Since I’m mentioning online learning, I’ll put in a good word for Tofugu; he offers online Japanese courses along with his rather entertaining blog.
END_OF_DOCUMENT_TOKEN_TO_BE_REPLACED

japan.internet.com recently reported on a survey conducted by goo Research on a topic close to the heart of many of my readers, I suspect, that of English study.

It does seem surprising to me that people seemed most keen on using their smartphone to improve their speaking skill, but it does suggest that the various Skype-based English lessons should ensure they support smartphone clients, and given the popularity that LINE has in Japan, supporting its new voice call feature too would seem like an easy way to expand one’s business.
END_OF_DOCUMENT_TOKEN_TO_BE_REPLACED

This survey from goo Ranking looks at what expectations Japanese have for fellow Japanese English conversation teachers – note that this means that the survey refers to adult learners, not school children.

Between the 8th and 13th of March 2012 1,055 members of the goo Research monitor group completed a private internet-based questionnaire. 51.2% of the sample were female, 16.9% in their twenties, 41.7% in their thirties, and 41.4% in their forties. Note that the score in the results refers to the relative number of votes for each option, not a percentage of the total sample.

Sort-of related, here’s a very interesting quote from the Osaka City governer on what he expects from English teachers in schools – I like the thought, but I don’t think teachers can just change subjects like that:

Teaching is also a form of status. There are many English teachers incapable of English. On the other hand, they have teachers whoâ€™ve come back from living in the United States teaching social studies. Thatâ€™s all they have a license for. Next to the teachers fluent in English are the English teachers who canâ€™t speak English at all, and the teachers back from the United States teach about the Japanese Diet, of which they know nothing.

END_OF_DOCUMENT_TOKEN_TO_BE_REPLACED

goo Ranking had a fun little ranking survey recently, looking at what unusual loan words that have come from Japanese to English. I believe the survey was conducted based on a Japanese Wikipedia list of loan words.

Over the 22nd and 23rd of July 2011 over 1,000 members of the goo Research online monitor group completed a private internet-based questionnaire. However, the link to the sample demographics does not work. Note that the score in the results refers to the relative number of votes for each option, not a percentage of the total sample.

About the only words you’ll find in a dictionary are hikikomori, which made it into the Oxford dictionary a couple of years ago, and the food ones. I’d like to know how Wikipedia decided on which words to list, as outside of the cooking ones most seem related to anime and manga, in particular the more seedy side of it.
END_OF_DOCUMENT_TOKEN_TO_BE_REPLACED

How business people use and study English

goo Research recently published the highlights of a survey they performed in conjunction with President magazine (hmm, I could very well buy that issue!) into the English-language ability of professional people.

Detailed demographics were not given, but the sample consisted of 1,031 members of the goo Research online monitor group who were not necessarily readers of President. The sample was also limited to those between the ages of 30 and 59 who had not lived overseas but had taken a TOEIC exam. Note that a TOEIC score of 470 corresponds to reasonable ability with conversation and 730 to the beginning of decent proficiency in English.

It’s a bit difficult to draw many conclusions from this survey as having to use English in the workplace is going to naturally improve your English level, and with a number of companies having regulations that require a certain level of English to get promotion, and in an international business the higher-ups are going to have to need English to negotiate, so I think this survey is illustrating correlation, not causation.
END_OF_DOCUMENT_TOKEN_TO_BE_REPLACED