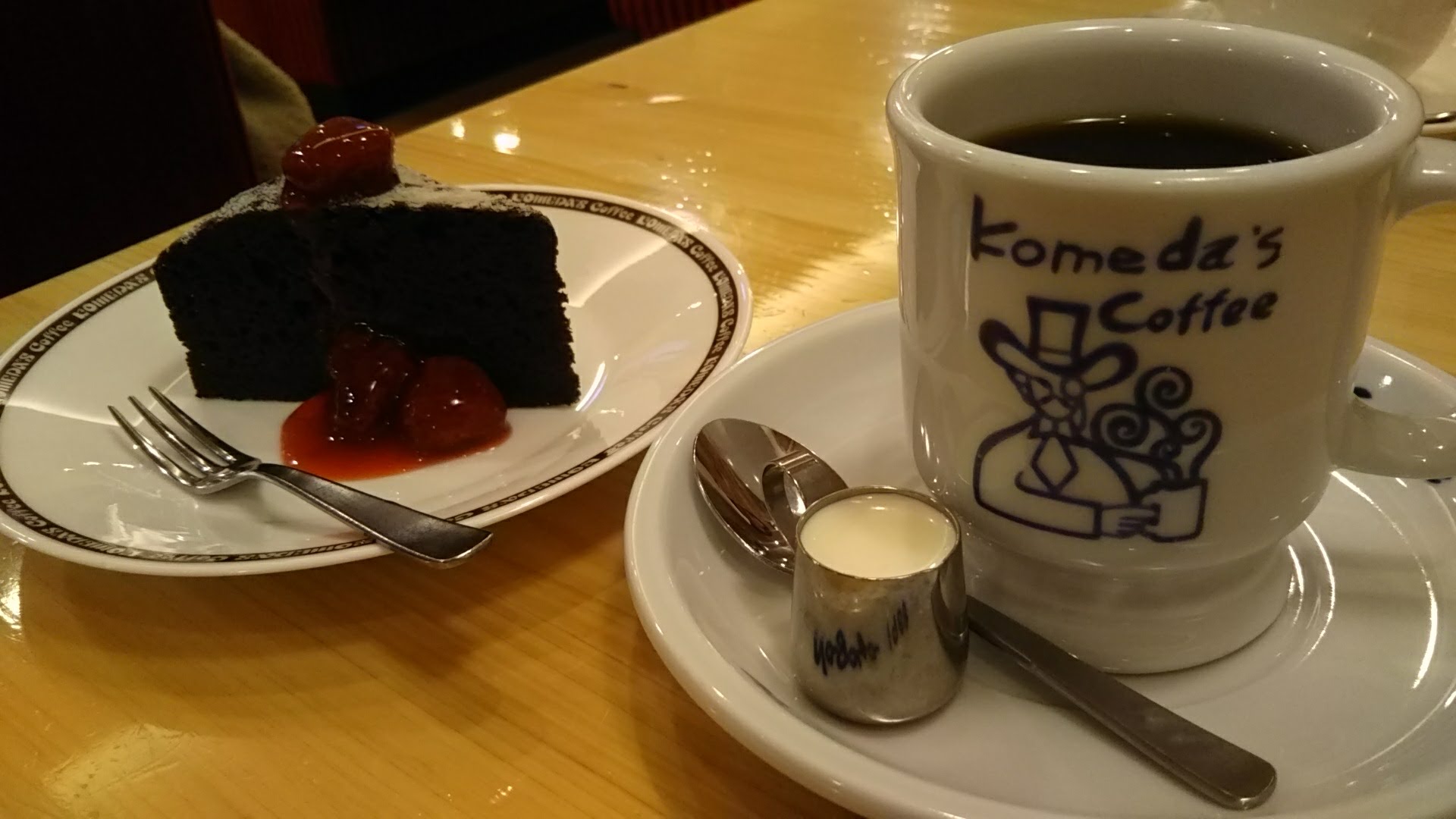 goo Ranking asked their readership to choose the most relaxing coffee shop chain in Japan.

Looking at the top three, when I lived in Kansai a friend of mine would post Facebook updates from Komeda Coffee, of which I was rather jealous as there were none near me, so when I moved to Tokyo I was keen to try, but the only one I’ve been to was a bit of an anticlimax.

Starbucks is often the very opposite of relaxing as there is often people busy talking on the phone, although I know of two in my town that are usually phone-free, and as long as I don’t think too much about the price they are quite relaxing; the French press of freshly-ground beans in particular is good.

Of all the Doutors I’ve been in, only one was approaching nice, let alone relaxing. However, the cheap coffee keeps me coming back.

My most relaxing is Tully’s; I’ve never been in a bad one and their plain latte is good value, but Saint Marc’s gets most of my business; there’s one the station before the office, so if I’m early in the morning, it’s just right to perk up and wind down with a hot coffee before work.

Where’s your most relaxing coffee?
END_OF_DOCUMENT_TOKEN_TO_BE_REPLACED

Correlation between coffee and cigarettes

This interesting survey from NTTCom Research looked for a correlation between coffee and cigarettes, in particular how visiting coffee shops might increase exposure to second-hand smoke.

In Japan, most coffee chains are smoking, with each chain and each store having their own particular degree of separation between smoking and non-smoking areas. Starbucks are 100% non-smoking, although those with terraces allow outdoor smoking, Tully’s (home-grown fake Starbucks) and Saint Marcs have enclosed smoking areas with air-tight doors, and Becks and Dotour varies from perfect separation to worst than useless. Most independent shops tend to be cancer-donor wards, although once in a while there are exceptions, so check reviews before you enter!

Note that in Q4, the numbers illustrate that this sample had 17.0% non-smokers, 63.3% ex-smokers, and 19.7% smokers. It looks to me as if the ex-smoker and non-smoker percentages have been switched, or that there was some form of pre-screening, but I cannot see anything in the text to say what exactly is happening.

Here’s a typical small privately-owned coffee shop. The owner probably brews an excellent cup of coffee at a wallet-damaging price, but as you can tell from the ashtrays in the photo, there will no doubt be a couple of regulars in a corner smoking the place out:

END_OF_DOCUMENT_TOKEN_TO_BE_REPLACED

Coffee habits of the Japanese

I’m quite surprised, however, in Q4 to see that Starbucks over-roasted drip coffee gets chosen as the favourite drink from there. I find it often quite undrinkable, but having said that, I was as Starbucks this morning (at last year’s Medicine Nobel winner’s hospital, Kitasato) and I have to admit that today’s blend was quite drinkable.

Here’s an old-school coffee shop that still survives despite Starbucks and friends:

END_OF_DOCUMENT_TOKEN_TO_BE_REPLACED

What happens in Japanese coffee shops

goo Ranking recently published a survey on what kinds of things happen at the adjacent coffee shop table.

goo Rankings asked iBRIDGE’s Research Plus to conduct this survey, where between the 27th and 30th of October 2015 500 members aged between 20 and 39, 50:50 male and female, of their monitor group completed a private internet-based questionnaire.

My typical thing (perhaps it doesn’t bother the Japanese enough to make the list) is ending up sitting beside at best a slurper, at worst (and this happened most recently last Friday) a post-snack tooth sucker; both are enough to make me want to change seats. I see insurance salespeople quite regularly, and the occassional dodgy MLM hard sell going on, but I’ve never had the religious cult stuff, although I do hear from other foreigners that at coffee shops near universities in particular, there is a lot of attempted recruiting going on.

Here’s a picture for No.1 from behind a laptop in a coffee shop; it’s a Mac, so the smug mug is a given…

END_OF_DOCUMENT_TOKEN_TO_BE_REPLACED

Between the 24th and 25th of August 2010 500 members of the iResearch monitor group in their twenties, thirties or forties and who drunk at least one coffee per week completed a private internet-based questionnaire. No further demographic breakdown was given.

I drink probably just under the one cup per week threshold. Coffee caffeine affects me much more than chocolate or tea, so I don’t as a rule drink it, limiting it to when eating out or sometimes when popping into cafes. My biggest exception is Mr Donuts, as they have unlimited refills for their hot coffees, so when I go I always make sure to have at least three cups, and damn the shakes!
END_OF_DOCUMENT_TOKEN_TO_BE_REPLACED

Although I feel Starbucks’ drinks resemble coffee in the same way that happoshu resembles beer (but without the low price tag), plenty of people love them, as this recent survey from iShare into star ratings for coffee chains shows.

Having said that I dislike Starbucks, I saw a poster outside one of their shops to say they now have seasonal tea lattes which did look nice, but not nice enough to tempt me inside.

My favourite chain is Kobe-based (although I did find one near Tokyo Tower once) and called UCC (Ueshima Coffee Company), with their green tea latte being a particularly fine drink.
END_OF_DOCUMENT_TOKEN_TO_BE_REPLACED

Ahh, coffee! I really love a good cup of coffee, but if I drink more than one cup a day the caffeine affects my sleep patterns. I can get away with many cups of tea, though; it’s just coffee’s (and dark chocolate’s, and gyokuro green tea’s) caffeine that does me in. Anyway, MyVoice took a look at the role of coffee in everyday life to see what the average Japanese thinks.

Over the first five days of August 2007 12,126 members of the MyVoice online community successfully completed an online survey. 54% of the sample was female, 2% in their teens, 17% in their twenties, 39% in their thirties, 28% in their forties, and 14% in their fifties.

I’ve looked at coffee consumption before, but hopefully this survey sheds some new light on the subject. Note that Q1 describes the most often drunk type, so perhaps those who drink canned coffee on the way to work, for instance, also down instant or filter coffee at the office, thus resulting in the poor showing for canned coffee in the results?

There’s a new advertisement out for Wonda Morning Shot canned coffee out now, so I tried my hand at uploading it to YouTube, so hopefully this works for you all. It features the famous director Akira Kurosawa, mounted samurai hordes, and a rush-hour train.

Go here if you are having YouTube problems to see the original – it’s my first go at uploading anything to YouTube.
END_OF_DOCUMENT_TOKEN_TO_BE_REPLACED

infoPLANT recently looked at the purchase and consumption of canned and other prepared coffee – this excluded take away coffee, I believe. They gathered their self-selecting survey by means on a menu option through the DoCoMo iMode menuing system. Over a week at the start of October 6,480 successfully completed the survey, with 65.7% of the respondents being female.

News of a new, heavily promoted can brand entitled Deepresso is doing the rounds of the blogs right now, but I personally prefer a hot and steamy Sixty-Nine in the mornings to get me going.

A bit of coffee trivia – apparently “morning service”, a discounted breakfast most coffee shops do consisting of a hot drink, perhaps toast, boiled egg, three lettuce leaves or a hot dog, was initially introduced in the ’50s or ’60s by a restaurant in Namba, Osaka, where it consisted of a cup of coffee and two cigarettes. Nowadays, although they no longer offer the cancer sticks along with the drink, the fug in the average joint allows one to secondhandedly inhale.

Talking of cancer, if you’re a non-smoker, may I suggest that you avoid Roots brand coffee, as that is made by Japan Tobacco.
END_OF_DOCUMENT_TOKEN_TO_BE_REPLACED

Starbucks rules in Japan too

MyVoice carried out a survey of its community at the start of this month to see what they thought about self-service (counter service only) coffee shops. 16,311 people, 46% male, completed their internet questionnaire. 3% were teenagers, 24% in their twenties, 37% in their thirties, 24% in their forties, and 12% fifty years old or over.

Japan is apparently the only country in the world (sorry, I can’t find a definite statement of the statistics) where the Coca-Cola Company make more money (or sell more by volume, or something) with a drink other than their signature fizzy brown bevarage, namely their line of Georgia canned coffee, which are, on the whole, either over-sugary, over-milky (a friend got kidney stones from drinking six or eight cans a day and hardly any other liquids, bar beer) or over-bitter for my taste.

Also note that in Japan there is little tradition of carrying out a cup of coffee from a shop. Even around Starbucks, almost no-one will drink their coffee anywhere bar the shop; I personally can only recall one time seeing a Japanese person carrying a coffee cup onto a train, for instance.

Finally, most coffee shops are still smoking. Starbucks is non-smoking throughout (except for seating outside, if available), but other chains often have perhaps only have a quarter or less reserved for non-smokers, and little effective segregation. However, note the last question, about why people like their particular favourite chain – only 9.5% choose smoking segregation (all non-smoking was not an option) as a plus, at most just a fifth of the Starbucks fans, versus 9% who choose that smoking is allowed, which is again just about a fifth of those with a favourite other than Starbucks.

I seem to have written far too much about Starbucks already! I’m much more a tea and table service man myself.
END_OF_DOCUMENT_TOKEN_TO_BE_REPLACED