I can’t believe I missed this survey from last year, where goo Ranking asked people to choose their cutest cat breed, but I suspect more than a little national pride influenced the result.

My cutest cat (although not a domestic breed) is the Sand Cat, which has recently featured in the news due to the first kittens born in captivity in Japan, as can be seen in the attached video.

Not that I’m biased either, but Scottish Folds are the loveliest; Munchkins are cute, but I can’t get past that they must be tormented by being unable to jump as well as their fully-legged cousins.
END_OF_DOCUMENT_TOKEN_TO_BE_REPLACED

Today is Japan’s Day of the Cat, as one (rather tortured, it must be admitted) way of reading 22/2 is nya-nya-nya, the Japanese equivalent of meow-meow-meow, so this is a perect excuse for goo Ranking to publish, and for me to translate, Japan’s favourite cat breed.

Mine is probably the bog-standard ame-sho, as it’s known in Japan, the American Short Hair. Looking at the list of breeds and votes, I think once we pass number 20 or so, people are just voting for cool-sounding names rather than any knowledge of the actual breed. I suspect the big vote for Other at the end is for people looking for the standard Japanese three-colour cat, which doesn’t seem to appear on the list, or just people hoping “moggie” was a breed. END_OF_DOCUMENT_TOKEN_TO_BE_REPLACED

What Japanese love and hate about cats

I cannot find a nice goo Ranking for Silly Sunday, so instead let’s have some kittens, with a look at what people love and hate about cats by @Nifty, which I’ll present as a ranking.

I’d love to visit this temple! 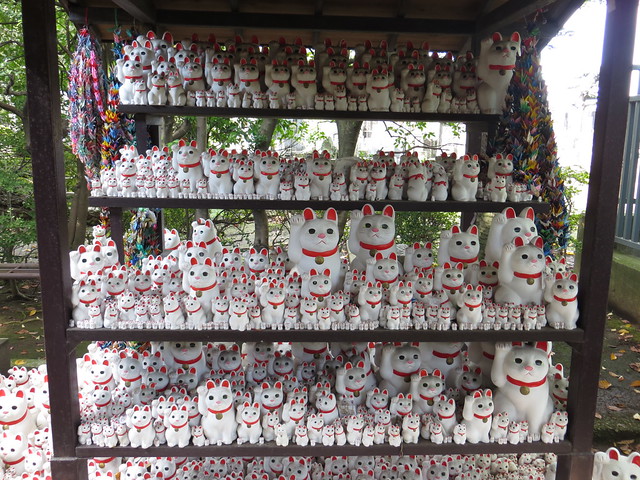 I’m very much a cat person, and I’m joint owned by two of them. Frequent vomiting is probably my least favourite thing, especially as one cat has a chewing habit, and never learns that eating his blanket, eating sticky tape, eating his cardboard bed, etc, are guaranteed to have him spewing up the next day.

By the way, translating this survey I learnt that the breed ãƒžãƒ³ãƒã‚«ãƒ³, read Manchikan, is actually called Munchkin in English. When I tried Googling how I thought it was spelt, Google corrected me to Mancunian…
END_OF_DOCUMENT_TOKEN_TO_BE_REPLACED

This quicky from Anicom Animal Insurance looked at a cat’s effect on family life. This survey was released on the 29th of September 2012, which is apparently Maneki Neko (Beckoning Cat) Day. 653 cat owners answered the survey between the 12th and 17th of September 2012. This seems like a Read more…

What cat and dog owners did in Golden Week

Pet and Family, an insurance company who bill themselves as being “low cost and short term”, took a look at pet owners’ plans for Golden Week. Golden Week is just ending as I type this; the 29th of April and the 3rd, 4th and 5th are public holidays in Japan, and many employers (including mine) make the intervening days holidays too, and this week-long holiday period is known as Golden Week.

Between the 12th and 14th of April 2013 1,667 pet (presumably cat and dog only) owners from all over the country aged between 20 and 79 completed “internet research”. The means by which the sample were chosen, etc, is not disclosed. 68.0% of the sample were male, but no further demographic information was given.

Note further that it does not say if any people had both cats and dogs. or two sizes of dogs, etc, or if they had, how they should answer Q1 and others.

I’d like to see more detailed breakdown of the figures; how many people who went on overnight trips left their pets (specifically cats) home alone? When I was single, I left my cat at home for a maximum of three nights, although that was the exception rather than the rule, as I usually took him to a cattery. However, in Japan there are few catteries, so if we go away we have to put our cats in with the vets, and they just have a large-sized box to stay in.

I didn’t do anything this Golden Week bar one trip to the theatre (I slept through much of the first act!) and one trip to see the in-laws.
END_OF_DOCUMENT_TOKEN_TO_BE_REPLACED

Cats and dogs and apps

This is a survey that would have been quite interesting to see in full, but even this small extract in japan.internet.com from a survey by goo Research into cat people and dog people was rather enjoyable.

I’m a cat person, for many of the reasons listed below. Dogs are friendly because they see you as their leader, but cats like or dislike you just because they can, so to have cats sit on your lap is a sign of mutual trust, unlike a canine’s genetically-programmed hierarchical response.
END_OF_DOCUMENT_TOKEN_TO_BE_REPLACED

To celebrate the Day of the Cat in Japan (22/2 can sound like nyan-nyan-nyan, Japanese cats’ onomatopaeic meow) goo Ranking asked which member of AKB48 looks most like a cat. Demographics Between the … Oh, bugger this! I am not the least interested in AKB48, a stupid pop group with Read more…

Ah yes, another wonderful trolling headline after my dog food survey from a few years back! Note that it means that 8% of cat owners make food for themselves that they sometimes either share or pass the left-overs to Tibbles, not that eight out of ten cat owners prefer Kit-e-Kat! Any, back at the survey, it was from DIMSDRIVE Research, looking at pet food, and dog and cat food in particular.

If I was buying a kitten now (as opposed to getting a free moggy) I’d probably go for a Scottish Fold. There’s a really lovely Scottish Fold that regularly visits a nearby pet shop – he’s very relaxed and doesn’t mind being the centre of attention when he’s out for walkies.
END_OF_DOCUMENT_TOKEN_TO_BE_REPLACED

With the trial of UQ WiMAX, high-speed wireless offering a maximum speed of 40Mbps, having started in February and the paid-for service planned to launch in July, this survey from goo Research looked at data transmission, concentrating in this report on WiMAX.

The rather strange title of this survey comes from an advert for UQ WiMAX that features a YouTube kitty which… well, just watch:

Yes, that’s it in its entirity. I’d never heard of the advert, but after I first read the survey I happened to be in an electrical store with a WiMAX-equipped notebook computer looping the above advertisement.
END_OF_DOCUMENT_TOKEN_TO_BE_REPLACED

Here’s a topic that makes me purr with satisfaction, a recent survey from iShare into pet blogs which found that blogging cats were much more popular than dogs.

Between the 14th and 19th of May 2009 565 mobile phone-owning members of the CLUB BBQ free email forwarding service completed a private internet-based questionnaire. 53.6% of the sample were male, 35.0% in their twenties, 31.7% in their thirties, and 33.3% in their forties.

I don’t read any pet blogs myself, but my wife keeps a regular watch on Nyanny Cat Cafe, some person with a cocker spaniel whose blog isn’t really interesting enough for me to look for to provide a link, and a vegan Japanese ex-resident of Edinburgh dog-owning woman.

I (well, my wife used my name) also recently won a cat photo book. In Q3, the “other” category would include alpaca, as there is a bit of an alpaca fad doing the rounds these days.
END_OF_DOCUMENT_TOKEN_TO_BE_REPLACED