A long time ago I used to use paid-for virus checking, but ever since Microsoft moved into the business I’ve never felt the need for extra protections that don’t do much except permanently slow down the computer. At the office we have Virus Buster which runs every day at 12 noon and would bring slightly older machines to their knees for the following two hours, which is enough to put me off ever voluntarily installing such software.
END_OF_DOCUMENT_TOKEN_TO_BE_REPLACED

About four in ten LINE users have witnessed account hijacking

When I first read the headline figure I thought it was rather high, but the text mentioned hijacking included friends’ Facebook posts promoting sunglasses, which I was seeing about once every couple of weeks last year, although it seems better recently. Anyway, this survey from the chat and SNS service LINE was into the security literacy of their members in the run-up to their “Cyber Disaster Prevention Day” on the 9th of June.

Just to fill up some space, here is a UFO Catcher full of LINE characters: 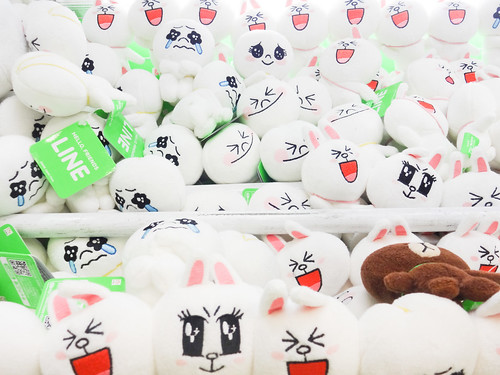 END_OF_DOCUMENT_TOKEN_TO_BE_REPLACED

japan.internet.com recently reported on a survey conducted by goo Research into two factor authentication, a security method that usually consists of a web site sending you an access code to your registered mobile phone when you try to log onto their services. Google also provide an Android application that generates the access codes locally.

Last year I wrote some client (Android and iPhone) and server (Apache and Microsoft Server) code to support two factor authentication using a TOTP. I’d love to tell you more, but I cannot as it was (a) work-related and (b) a retelling of the tale would require mentioning other people who might read this blog in an unfavourable light.
END_OF_DOCUMENT_TOKEN_TO_BE_REPLACED

Between the 24th and 26th of September 2013 1,118 members of the MMD Labo monitor group completed a private internet questionnaire. The sample was of both sexes and ages ranged from 20 to 59, but no further details were given.

I think I’ve had most of the problems listed in Q2SQ1! One other one I had was that I wanted to cancel a web hosting service, but in order to do that you had to send a letter (Fax would not do!) at least a set number of days before a billing cycle. I’d tried to get in touch with customer service to sort out a few matters, but as the date rolled round I just cancelled my credit card payment. They sent me payment reminders for about six months, but I just ignored them all and they eventually gave up. I had paid for all the services I used, and they had tried to charge me an extra month or two for services I couldn’t use because they had suspended my account.
END_OF_DOCUMENT_TOKEN_TO_BE_REPLACED

One in four smartphone, tablet users pay for security suites

japan.internet.com recently published a report on a goo Research survey into IT device security, their fourth regular survey into this topic.

I’m quite happy using the free Microsoft Security Essentials, myself. However, I’ve just moved to Linux, the Crunchbang distribution; in fact this is my very first survey typed through the Notepad-equivalent editor GEdit, to which I’ve added a self-written macro that builds the tables you see below. I might upload it to GitHub sometime soon…
END_OF_DOCUMENT_TOKEN_TO_BE_REPLACED

Macromill Research Inc released an up-to-the-minute survey into spring storms, as Japan has been suffering from them this weekend.

Between the 7th and 9th of April 2013 1,000 members of the Macromill monitor group completed a private internet-based questionnaire. The sample was exactly 50:50 male and female, and 20.0% in each age band from the twenties to the sixty years old or more group.

For me the storm was a bit of an anti-climax; we had a few hours of horizonal rain, but nothing out of the ordinary compared to when I grew up and we used to have two or three days-work of Atlantic gales to handle. I always feel the same way with typhoons; they can be nasty when they pass straight overhead and you are in a mountainous area or flood plains which amplifies the effect of the rain, but preparations, tying everything in the garden down, always feel like a waste of time.
END_OF_DOCUMENT_TOKEN_TO_BE_REPLACED Anyway, I’m curious why tablet security is increasing but smartphone staying static. One factor in the tablet rise is no doubt due to Android increasing market share, and curiously enough if all the extra 36 tablet owners in Q1SQ were non-iOS users, and all of them used security software, then the rise from 42.1% to 55.2% is explained, but I’m sure that’s just a numerical fluke.
END_OF_DOCUMENT_TOKEN_TO_BE_REPLACED

Majority of Japanese Android users will never return to Galapagos

japan.internet.com recently reported on an interesting survey from Trend Micro into Android smartphone usage. Actually, no survey title was given in the article, but that is probably close enough to the theme.

Towards the end of 2012 316 people between the ages of 18 and 59 who had changed from a feature phone to Android in 2012 completed a web-based questionnaire, although it is not clear how they were selected or if the survey was private or not.

Note that Galapagos in the title comes from a frequently-used term for Japanese feature phone which have evolved in isolation to devices uniquely suited for their environment, but unable to establish a foothold anywhere else in the world.
END_OF_DOCUMENT_TOKEN_TO_BE_REPLACED

goo Research recently carried out asurvey into the interesting topic of smartphone privacy, although japan.internet.com only reported on the security lock results.

I don’t use any lock on my smartphone, myself. I’d like to see some sort of voice-based password that combined both voice and phrase recognition.
END_OF_DOCUMENT_TOKEN_TO_BE_REPLACED

A recent Cabinet Office Japan survey into public order, much to my surprise found that the populace no longer pinned the blame for Japan’s ills on foreigners, even when compared to the same survey three and six years ago.

Between the 5th and 15th of July 2012 3,000 randomly-selected Japanese citizens were selected from resident rolls and approached for face-to-face interviews. 1,956 people agreed to take part, but a further demographic breakdown was not provided.

I’m not really sure why the figures for fear of foreigners have changes so dramatically for the better in the last six years, and I’m not sure how I would go about finding out the reason behind it. However, it does also seem clear that the new bogeyman is Reefer Madness, especially as round about the time of the survey there was no end of stories about a current social problem of legal highs, dubious cannabinoid derivatives sold as incence in a multitude of shops in Japan’s big cities.
END_OF_DOCUMENT_TOKEN_TO_BE_REPLACED