One in three Japanese clinging to their feature phones

My two-year mobile phone contract is up for renewal this month, and after a short visit to my local Docomo shop, I found that I will be paying about 7,000 yen, the cheapest data plan they offer, for up to three gigabytes of data, free wifi and a few free minutes, not that I actually phone anyone much. On the other hand, I can get a cheap SIM, including getting my current number moved over, with the same 3 gigs of data and fee wifi, for about 1,500 yen per month. A hard choice…
END_OF_DOCUMENT_TOKEN_TO_BE_REPLACED

Shortly before the launch of Apple’s iPhone 6s, MMD Labo conducted a survey into the iPhone 6s and iPhone 6s Plus.

Over the 17th and 18th of September 2015 3,000 mobile phone users aged between 15 and 69 completed a private internet-based questionnaire. No age breakdown was given, but there were 1,000 respondents from each of the three major mobile carriers, docomo, au and SoftBank.

I’m not interested in the iPhone at all; it mollycoddles the user too much for my liking, and I’ve not been a faw of Apple since way back when I had to use one that was too clever for its own good, getting in the way of the workflow I wanted to do, and more recent encounters have been similar exercises in frustration.
END_OF_DOCUMENT_TOKEN_TO_BE_REPLACED

Almost all high schoolers have mobiles, vast majority are smart

Mobile Marketing Data (MMD) Labo recently conducted a survey into middle and high schoolers and mobile phones, although it was actually the mothers of said schoolkids who were interviewed.

Over the 7th and 8th of August 2015 627 mothers aged between 20 and 49 who had school children in either middle or high school completed a private internet-based questionnaire. No further demographics were provided.

I’m probably just a grumpy old man, but if no mobile phone was good enough for me, it’s good enough for kids today. Quite honestly, smartphone addiction, specifically getting lost in LINE, is a serious issue for kids in today’s society. Bah, humbug!
END_OF_DOCUMENT_TOKEN_TO_BE_REPLACED

Over the 3rd and 4th of July 2015 1,064 users of cheap smartphone SIM cards completed a private internet-based questionnaire. However, no further demographic information was presented.

My two year contract is up in a couple of months, and I am almost definitely going to switch from my full-service but 5,000 yen per month plan to perhaps a 3GB data-only plan (no-one phones me!) with a public wi-fi add-on option and keep my current device, saving over 3,500 yen in the process, so even if my phone dies within a year, I’ll be able to buy a new one with the savings.
END_OF_DOCUMENT_TOKEN_TO_BE_REPLACED

Mobile Marketing Data Labo recently published the results of a survey into feature phone usage by the senior generation.

Over the 16th and 17th of June 2015 1,110 people aged sixty or older completed a private internet-based questionnaire. No further demographics were given, but all were feature phone users.

Here’s some random senior fiddling with his flip-phone: 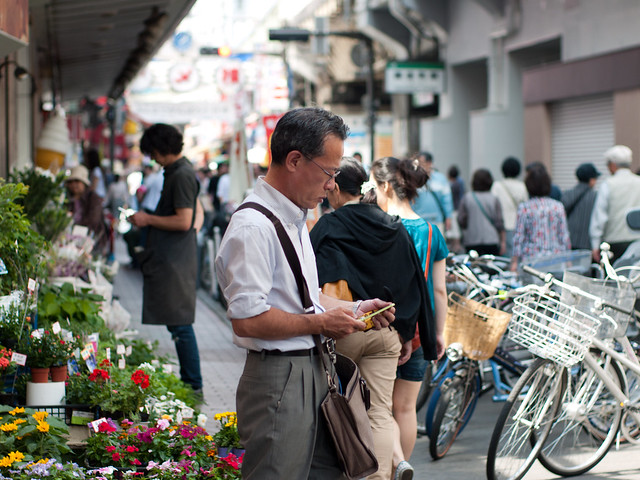 END_OF_DOCUMENT_TOKEN_TO_BE_REPLACED

MMD Labo recently published the results of their survey into user satisfaction with cheap smartphone SIMs.

Between the 21th of April and the 7th of May 2015 1,250 users of cheap smartphone SIMs completed a private internet-based questionnaire. The only other demographics offered were that there were 250 users of each of the five leading brands, OCN Mobile One, IIJ mio, BIGLOBE LTE 3G, Rakuten Mobile and b-mobile.

I currently have a standard, expensive SIM (around 5,000 yen even with various family discounts), but in Autumn my two-year contract is up, so I am very tempted to go for one of these cheap cards, especially as I make almost no phone calls; under 2,000 yen per month seems very possible. I’ll keep my existing phone, a Sharp SH-04F, as it’s still in good shape and I don’t see any new features in the last two years that make me want to upgrade.
END_OF_DOCUMENT_TOKEN_TO_BE_REPLACED

One in five Japanese internet users have a tablet computer

Lifemedia Research recently conducted a survey into tablet computers. This is the sixth time they have conducted this annual survey; last year 18.8% of the sample owned a tablet, so ownership has grown, but of the non-owners, 46.0% last year wanted one, whereas this time the interest has dropped to 38.5%.

Between the 26th of December 2014 and the 7th of January 2015 2,400 members of the Lifemedia research panel completed a privagte internet-based questionnaire. The sample was exactly 50:50 male and female, and exactly one-sixth in each of the age bands of twenties, thirties, forties, fifties and sixties.

I recently got a free wifi-only eight-inch LG G Pad from my cable provider, but I’ve only actually used it once to update the software! My wife has rarely used it too, and her main use of the PC involves Flash applications, so I think the device will be gathering a lot of dust.
END_OF_DOCUMENT_TOKEN_TO_BE_REPLACED

Here’s an interesting survey from goo Research, reported on by japan.internet.com, that I found lying about on my hard disk; it was a look at Wi-fi at overseas airports.

Setting up one’s device is usually pretty painless these days, but the problem I have is that certain airports have a system that requires you to watch an ad before you can sign in, or others hide the “free” button away in a corner in order to persuade you to sign up for the paid version.
END_OF_DOCUMENT_TOKEN_TO_BE_REPLACED

I’m back, hopefully getting back into a regular multiple-posts-per-week schedule, with this look at taxi hailing apps.

Most of Japan’s taxi apps are official ones from taxi companies; a service like Uber does not exist in Japan, and I don’t think it would work here. As I understand it, taxi companies in America often do not come when called, so Uber, even though it apparently more expensive than a regular taxi, fills a niche. In Japan, there are if anything too many taxis, so failing to appear is never a problem.
END_OF_DOCUMENT_TOKEN_TO_BE_REPLACED

Both surveys were conducted between the 18th and 21st of December 2013. The map survey had 556 respondents, and the schedule one 560. All the respondents were pre-screened as smartphone users, and for the map survey 232 people, or 41.7% were iPhone users, and the remaining 324 people (58.3%) were Android users. No further demographic information was provided.

I don’t use maps on my private phone, and my wife serves as my calendar! She has both a smartphone and a standard feature phone, but she manages her schedule on the feature phone only, mainly because the battery life is better and it can do things like switch itself on when alarms ring.
END_OF_DOCUMENT_TOKEN_TO_BE_REPLACED