This ranking survey from goo Ranking looked at movies from the 1980s that people want to watch in the cinema again.

I’m familiar with all the Hollywood movies listed here bar Big (I’ve only seen snippets), and about half of the Japanese ones. Top of the list, Back to the Future, interestingly had a now-cancelled Japanese manga version planned:

The Japanese titles of the Hollywood movies are mostly straight transliterations, but some turn out a bit funny; An Officer and a Gentleman is A Journey of Love and Youth, Karate Kid is Best Kid, Coming to America is
Go to New York, Prince of the Stars, and When Harry Met Sally… is Premonition of Lovers.

The Japanese titles are mostly direct translations, but the Kitano film Violent Cop literally translated would be That Man, Being Violent.

What 80s film would you most want to see on the big screen again?
END_OF_DOCUMENT_TOKEN_TO_BE_REPLACED

This fun little ranking survey from goo Ranking asked Japanese to choose who they rated the most as Japanese living legends of rock.

My top pick would be number 5 here, Southern All Stars, but there’s a good number of groups I’ve never heard of. One that caught my eye was Yabai T-shirts Yasan, in English “Dodgy T-shirts Shop”, who have a post-punk pop feel and rather silly lyrics, like this ode to Bluetooth Love, and sillier videos like this one:

goo Ranking recently published a straightforward survey on which Pixar movie moved people the most.

For me it has to be Toy Story 3, although I’ve never actually seen Monsters University, and I only caught the last 15 minutes of Finding Dory in Japanese once, but it seemed more silly than moving to me!

Anyway, here’s an article on the closing scene in Toy tory 3 and the accompanying video:

END_OF_DOCUMENT_TOKEN_TO_BE_REPLACED

This report from ICT Research and Consulting has figures I’ve been wanting to see, taking a look at the use of internet video delivery services.

As a comparison, in the USA 58% of all households have some paid-for service, with the top service being Netflix, with 50% of US households having a subscription.

I don’t have any (and only rarely watch YouTube) and quite frankly I don’t think I could find either the time or energy to watch anything, and I don’t feel my life is in any way empty by not having watched Game of Thrones!
END_OF_DOCUMENT_TOKEN_TO_BE_REPLACED

Shogi, a Japanese chess-like game, has been in the news for most of the last year as a new 14 year-old professional Sota Fujii was on a record-breaking run of 29 straight wins, starting from his very first professional game, so this survey from Smart Answer into shogi has answered for me questions I had about how much shogi is truly played.

I’ve provided a graph of teenage boys and shogi rules, as perhaps they would be the age group most influenced by Sato Fujii’s activities, and also because there were no overall totals presented…

Here’s a Shogi set for the under tens, based around the famous kids’ animation character, Doraemon.

END_OF_DOCUMENT_TOKEN_TO_BE_REPLACED 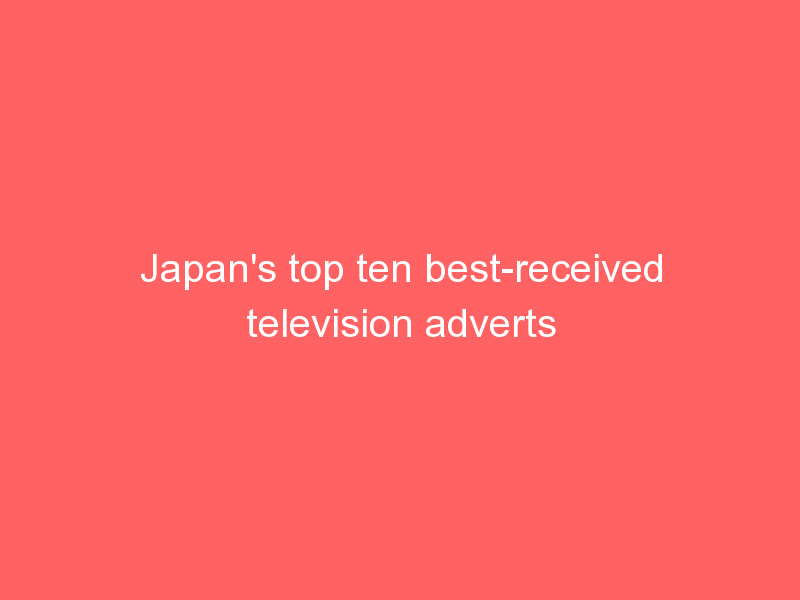 The CMDB, Commercial Message (that is, television adverts) Database, part of the CM Sougo Kenkyusho, or Central CM Research Centre as it might be translated to in English, recently published the results of a survey into the best-receieved television advertisements of 2015.

Between the 20th of October 2014 and the 19th of October 2015 12 monthly surveys were conducted on 3,000 people per month into the best-received adverts for that month, then the results were summed up over the year to get the overall ranking presented here. The respondents all lived within Tokyo or the surrounding five prefectures.

Without further ado, let’s look at the results. The survey listed representative advertisement names from long-running campaigns, so I shall show the first hit on YouTube for each of the titles.

END_OF_DOCUMENT_TOKEN_TO_BE_REPLACED

I think that the survey is a bit flawed as the survey seems specifically about legal distribution of commercial contents, such as with YouTube Movies, but I wonder how many people just assumed the survey was about YouTube itself; however perhaps there was more background explained to the survey respondents?

A couple of months ago I signed up for a free trial of J:COM On-Demand, but I just didn’t have any time to watch anything, so I just cancelled last night.
END_OF_DOCUMENT_TOKEN_TO_BE_REPLACED

Japanese expectations for the World Cup

With Japan about to kick-off their World Cup tournament playing Cote D’Ivoire in just over seven hours time, I just have time to squeeze in this survey from @nifty looking at people’s expectations for the World Cup.

Between the 30th of May and the 5th of June 2014 4,694 members of the @nifty service completed a private internet-based questionnaire. No further demographics were provided.

I’m probably going to watch the match tomorrow morning, although I might just have to listen in on audio as Sunday morning is my vacuuming time. For the final match against Greece, the office is have a group viewing on the hundred-and-whatever-inch television we have. The match is due to finish at 8:45 am local time, but as work officially starts at 8:30 the management has generously offered to, err, switch the telly off at 8:25 so we can all get ready for the start of work. I predict there will be more people taking holidays or finding an excuse to come in to work slightly later than actually watching in the office; I might even make up some excuse myself and attend a public viewing.
END_OF_DOCUMENT_TOKEN_TO_BE_REPLACED

Over one in three Japanese self-identify as otaku

There were actually two surveys conducted. The first had a sample of 1,843 men and women aged from their teens to 49 years old, and the second involved a subset of 335 people from the original sample (I think – it is not too clear) who had identified themselves as otaku in Q1.

Although the demographics are confusing, there does seem to be an indication that the eldest child is an otaku. There is perhaps a reason involving Japanese family structure, but what that might be I have no idea! I welcome any wild speculation from my readers!

These holy grounds are the real life locations represented in various anime and manga; for instance, here is their entry for the hot springs and hotel in Sprited Away/Sen to Chihiro no Kamikakushi.
END_OF_DOCUMENT_TOKEN_TO_BE_REPLACED

Majority of Japanese did not visit cinema last year

Aeon Cinema, a cinema operator, recently released the results of a survey into cinema-going habits.

Last year I probably managed about six or so movies, mostly western human drama stories. I find action and SF movies these days a bit too loud and intense; the one I went to last year was Total Recall, which was pretty atrocious.

From this summer, though, I qualify for the old folks discount at my usual chain, so perhaps I’ll be seeing more movies in the second half of the year? For the first half, I want to see Rush and The Hobbit part two, both of which are not out here yet.
END_OF_DOCUMENT_TOKEN_TO_BE_REPLACED