With the ongoing whaling by Japan being generally supported by the Japanese public, this perhaps sums up Japan’s official stance. It was Masayuki Komatsu of the Fisheries Agency who made that famous statement on minke whales being the cockroaches of the sea. What do you think? Save the Whales! Eat Read more…

Since I’m being slightly off-topic this evening, here’s an interesting article that was passed to me from Andy at Siberian Light about a little bit of history that perhaps not many Westerners are familiar with (it was news to me), but which holds a pivotal role in shaping both the Read more…

The history of whaling in Japan

My mother sends me clippings of the Economist regularly, and in this month’s batch was a very interesting article on how 200 years ago it was Westerners, mostly Amercians, who were encroaching Japan’s sovereignty – rather than today when Japan fishes (or should that be mammals, if that noun is Read more…

Immigration will cause loss of unique identity: poll

According to a poll recently conducted on behalf of the national broadcaster, when asked if without immigration would the nation’s economy suffer, almost half (49%) of the people of this island nation bravely trying to hold out against the inevitable forces of globalisation thought that it would not suffer without Read more…

Candidates for Word of the Year 2007

I was going to post on this myself, but Mari beat me to the punch. Pop over and see her selections from the candidate list of 60 trendy words and phrases. 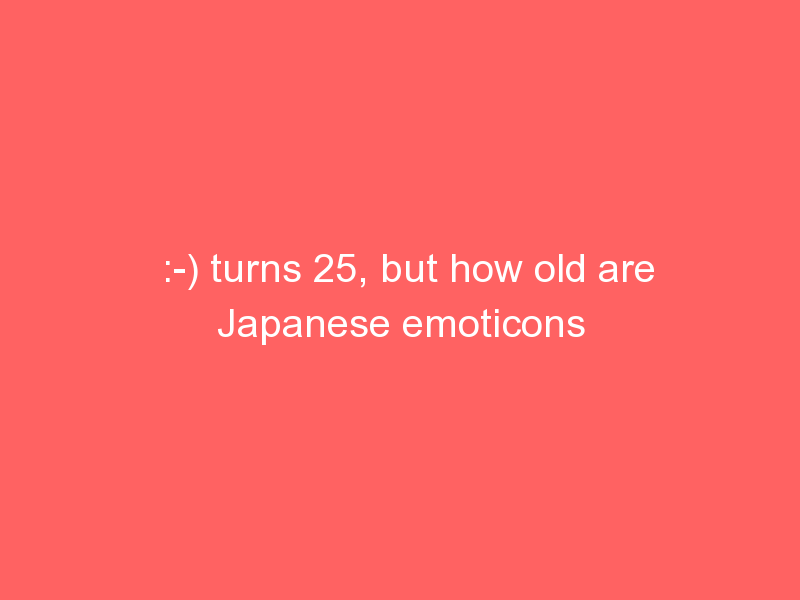 You may have heard the news that 25 years ago on the 19th of September 1982, there was the first recorded use of western smileys on usenet. However, that got me wondering as to how old horizontal Japanese emoticons were. With a little investigation, I came across this Japanese page Read more…

Just a short note to say that Debito has published a detailed look at the recent survey on human rights, including bits from my translation and other more traditional news sources. He gives an interesting summary, and adds a few of his own opinions, so head over there and check Read more…

USA Today tries to understand the iPhone and Japan

I saw this story on Japanese eager to get hands on iPhones, and whilst I am somewhat irked that USA Today did not choose to interview me on the subject, I did get a hearty laugh at this comment: Culture. “The iPhone’s broad and easily accessible screen could actually be Read more…

I happened to notice on YouTube that an offline and online Tokyo news broadcaster Tokyo MX is currently copying CNN’s YouTube presidential candidates debate idea, by gathering questions for everyone’s favourite politician, the great internationalist Shintaro Ishihara. They are looking for 30 second questions to pose to him at some Read more…

Although I started out as somewhat of a skeptic about the iPhone, mainly in reaction to the blanket news coverage it has been receiving, reflecting on the situation I now consider that the iPhone has what it takes to be big in Japan; indeed to become the very first foreign mobile phone (Sony-Ericsson doesn’t countas foreign!) to be a success in Japan’s rather insular market. There are, however, a small number of additions and modifications that I propose Apple must make to the hardware, software, and design before they can consider selling it in Japan.

Looking at the market image of the three big mobile phone carriers, namely NTT DoCoMo, au by KDDI, and SoftBank, the most natural fit would be au, as according to many surveys they have the strongest image for being on the leading edge and for supporting music playback on their phones. However, if a bidding war starts, SoftBank may be prepared to lay the most cash on the table as they are most desparate for customers, and with Cameron Diaz and Bradd Pitt pushing an American image of talking on the phone for SoftBank, SoftBank’s president Masayoshi Son may see the iPhone as a natural extension of his brand. Therefore, I predict there will be a SoftBank iPhone on the shelves early next year.
END_OF_DOCUMENT_TOKEN_TO_BE_REPLACED