Around the New Year there are a lot of old and new customs or established events that perhaps no longer interest people; to see what they might be, goo Ranking ran a survey looking at New Year customs that people feel are no longer needed.

Between the 6th and 11th of December 2015 goo Ranking ran an open survey on their web site, which got 767 votes. Since it was an open survey, no demographics are available.

I’d personally vote to get rid of Osechi, the traditional food for seeing in the New Year. It does look nice, I suppose: 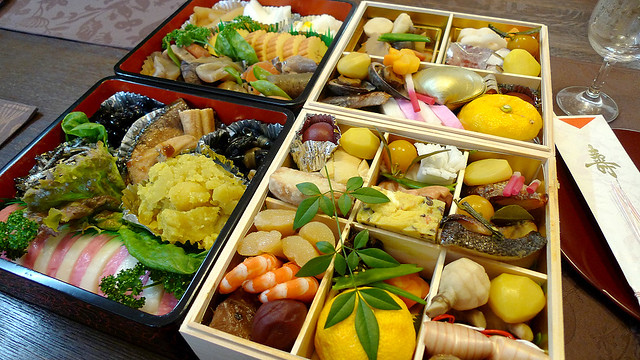 To give wives time off (yes, sexist, but it’s an old tradition) food becomes cold everything, with the only warm thing being miso soup with mochi (rice starch) balls. I have to commit the sin of dipping all the cold stuff into the warm soup to make it palatable. It’s enough to make you hanker for cold turkey, and indeed 9 (nine!) years ago I translated another survey on what people want to eat after too much osechi.

Q: What New Year established customs do you think are no longer needed? (Sample size=767)